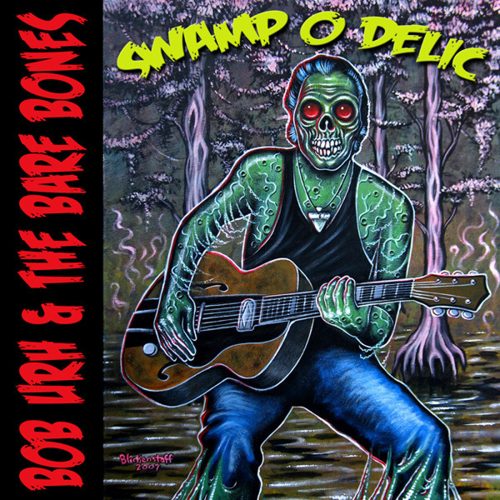 Buy Swamp O Delic in our store!
Release Date: 12/01/2020
Artist: Bob Urh
Catalog Ref: GC017
Excuse me y'all but i gotta introduce my blues. This ones called Swamp-O-Delic & whether it to be considered a solo record or not, one thing fur sure is - it was all recorded and played by me over a 6 month stretch while living in the great Nawlins. Produced by Ultra Productions. Written, recorded & performed by B. Urh (BMI) except were noted. Copyright 2007 (BMI) WARNING: Recorded on analog tape with some gear by: Gretsch, Vox, Wem/Watkins, Joe Meek, Danelectro, Silvertone, Favilla, Harmony, Alamo, Dallas Orbiter, Galiano, Farfisa & more !

Once in a while I come across a disc I was intended to review but fell through the cracks due to various reasons (work, time constraints, etc). Imagine my surprise when I was organizing some CDs and found this disc – so I put it on. The most recent (to the best of my knowledge) Bob Urh disc is a collection of minimalist bluesy rock and folk featuring mostly straight-ahead guitars and basic, simple percussion though occasionally weaving in elements of noise and psychedelia at moments. The overall feel in these songs builds a sometimes dark album with a crude vibe evoking swamps, zombies, failed relationships, and the like throughout. While Swmp O Delic isn’t a disc that fits easily into one category, this is a listenable, if sometimes unsettling, aural ride. I’m glad I finally found this but I wish I could’ve gotten to this sooner. – The Trouble With Normal