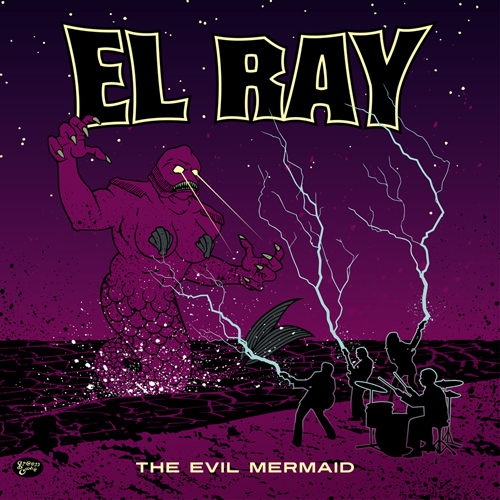 I was very fortunate to get an advance download of “The Evil Mermaid” (back in late June), and have been listening to it over and over again since then! El Ray really are at the very top of the surf heap, as far as I’m concerned – in my opinion one of the best surf bands in the world today, and given how much talent there is out there in the surf world, that’s saying a LOT! But “The Evil Mermaid” still came as somewhat of a surprise. Their previous album, “Chasing Ray,” was a bit of a left-turn, an experiment and an attempt to show off much wider influences than just surf music. They told me back in the summer of ’12 when they were touring California that they’d be returning to surf music with their next release, but I was still taken aback by “The Evil Mermaid,” mostly because I didn’t think any album this year could rival the Phantom Four’s “Mandira” for the surf album of the year – but my God, this one DOES! It’s a 20-minute mini-LP, with seven new original songs (available as download or vinyl 10”), and El Ray hits a new high with this release. I really can’t get enough of it! The songwriting is amazing, as is the musicianship – the twin guitar interplay (Jesper in the left channel, Lars in the right channel) is as good as anything by the Bambi Molesters whom people always hold up as the epitome of that sort of a thing – rightly so, they do it really well, but El Ray do it just as well! Add a highly-talented rhythm section, as solid and tasteful as it gets, always knowing exactly the right thing to play to complement the guitar parts as well as keep the groove going, and you’ve got the makings of a top-notch surf band. But then layer on top of it all Jesper’s crazy sense of humor, and you also get one of the most unique and fun and interesting surf bands playing today. And this album should convert anybody that is not already an El Ray fan – though I can’t really imagine such a thing: if you’re a surf music fan, you MUST be an El Ray fan! I don’t think it’s possible to not like these guys and gal (either as a band or as people, cause they’re just wonderful in person, too)!

Those Damn Kids – possibly the BEST surf song of 2014!!! It is truly a masterpiece! Opens up with a “Calhoun Surf”-sounding arpeggio, and then it goes into a supremely infectious verse which just keeps building and building. Jesper plays the first half of the verse and then switches to a driving rhythm guitar part while Lars picks up the melody and escalates the intensity with each run-through, culminating in Lars playing some beautiful, ingenious semitone bends and double-stops the third time through, which never fail to give me the shivers. Some really nice harmony and counterpoint between the two guitars in the bridge and the coda, too. Really, as far as I’m concerned, surf doesn’t get any better than this. On a scale of 0-10, this one goes to 11!!!
Three Kinds of Meat – inspired by a breakfast at a SoCal diner with Big Tiki Dude, who requested bacon, sausage AND ham with his breakfast , this is a horror-themed track (completely with occasional screams) that’s probably the closest El Ray get here to sounding like the material from their first two albums. Once again, some truly inspired guitar interplay, and a coming-out-of-nowhere key change and bridge towards the end.
The Peep Show – a dark, ominous track that seems like a commentary on the creepiness and sleaziness of strip clubs.
ElRaynia Uber Alles – Holy crap! El Ray take the classic Dead Kennedys’ track “California Uber Alles” and turn it into an amazingly effective surf track as only they could! A very fast and high-energy track with tight playing and ingenious rearranging, the title change is perfectly deserved as the song is now just as much El Ray’s as it is the Dead Kennedys’ – they’ve truly made it their own! (I believe they worked this one up for their California tour, and we can only be grateful that they decided to record it, too.)
Den Shaker – a wistful, ‘end-of-the-summer’ type song, with a delicate melody and subtle-but-so-effective guitar interplay. Just gorgeous.
Justin Case – You gotta love the title! A fast surf track with some great double-picking and a dark vibe, augmented by an amazing Hammond organ which works surprisingly well. Love the bridge with the fake ending – when the kick drum leads into another verse, there’s a real sense of tension-resolution and relief. Really, you’ve got to be 1) an accomplished musician and 2) seriously damn talented to be able to write a song like this! Impressive and visceral.
Double Penetration – a slower variation on Link Wray’s “I’m Branded” riff, with HUGE attitude and balls, and a verse that gets increasingly ‘mental’ and ‘outside’ as the song proceeds, Jesper and Lars trading back and forth on verses. The bridge gets intense, with some exaggerated surfy glissandos and snare rolls, and just when you think the song is going to go into a fast section, they bring it back down to the grinding riff. So cool….

All in all, a stunning piece of work and for me, along with the new Phantom Four and the Derangers albums, the soundtrack of the summer of 2014. And it’s been a marvelous summer so far, no doubt more than just partly due to this amazing music! Cannot recommend this highly enough – get it NOW! You really won’t be sorry!